2012 Year of the Black Water Dragon

It's a dragon year - such vigorous, exhilarating, unpredictable energy! Do with it what you will...

On one of my favorite author's blogs this question was recently posed: "How do you define success?" The author was feeling adrift in the wake of negative reviews, or no reviews, uncertain sales, and all the typical malais that goes with being  a writer. My response to the post was this:

Come to think of it, that's not bad advice for all of us. May your dragons of 2012 always be supplied with a good stack of quills and scrolls! 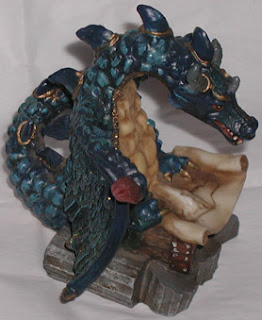 Posted by Anne Petty at 5:37 PM No comments:

So, in my small town last week our local newspaper ran a really wonderful feature with color pictures about my publishing company, Kitsune Books, which has meant that suddenly my invisibility cloak has been yanked off. A cashier in the Winn-Dixie says, "hey, you're that woman in the paper" or our waiter at a local seafood restaurant hands my husband the check and says, "Aren't you...we were just reading about you in the paper up at the front desk." The hubs has had quite a few people accost him and say, "Was that your wife we read about?" All well and good. The publicity from the article is great - couldn't buy that kind of coverage - but it has lead to some odd moments as well.

I've gotten a number of calls from people looking for the Kitsune bookstore so they could get the latest Pat Conroy thriller. Sorry, we're not a bookstore and we don't publish him. For those who figure out that I also write books as well as publish them, the question then comes, "Wow, what do you write?" and I say, "Horror." Then comes the awkward moment where they look at me like I might have said I strangle puppies for a living. It doesn't compute.

So then I'm required to explain myself. Really, I'm not a deranged person, I just have a taste for the literary darkside. The real test then comes in trying to differentiate between the kind of horror I like to write and something like Saw IV which is what leaps to the minds of many people when you say the word "horror." I write literary horror (yeah, there's even a Goodreads group for that). I particularly love the kind of terror that's psychological, where frights are implied but not always graphically described, where the reader's mind is forced to conjure up what frightens him or her most rather than making them wade through literal buckets of blood to get to the inevitable conclusion of the book or story.

Case in point. Recently a flash fiction story of mine called "The Real Deal" was accepted for publication in a new horror anthology. Although it's about a serial killer whose karma catches up with him, not a drop of blood was spilled onstage, so to speak. Yet it was deemed spooky enough (and well written, according to the anthology editor) to be chosen for a collection of horrific tales.

P.S.  Here's a link to the feature that sparked this blog entry: http://www.kitsunebooks.com/WakullaNewsFeature.html

Basking in the glow

Christmas came a little early this December, with two glowing reviews for Shaman's Blood. It's always gratifying when a reader totally gets what you were trying to do.  Give these great reviews a read if you're so inclined: