Light Beyond All Shadow arrives!

This morning the mail brought a lovely hardback book I've been anticipating for a couple of years. I can't believe it's been so long since I first answered the call for papers from Dr. Paul Kerry, who was putting together a volume of essays from Tolkien scholars about the submerged aspects of Christianity in Tolkien's works.  I had been wanting to write about the iconography of Middle-earth from the approach of semiotics, and Paul's proposed book started me thinking about how I could shift my research to fit his topic.

I wrote a long, involved essay with copious references that ended up being trimmed by a third, and then tightened again as the book's publisher ran into the wall that is The Tolkien Estate and their copyright issues over quoting from the master's works. That debate was to eat up a couple of years. Some contributors dropped out from frustration, others decided to stay the course. And then, the university publishing the book changed their own publishing/distribution company, and there was more waiting.

I'm happy now that I decided to stick it out because today I have this beautiful book in my hands, and my essay on Tolkien's iconography happily lodged in illustrious company between its pages. 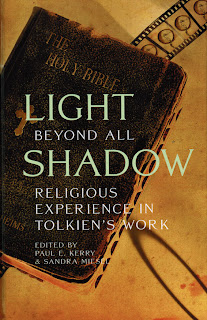 Hope the winners are happy!

Well, the Goodreads Giveaway is done!  Hope those 10 people who won a copy of Shaman's Blood enjoy their little prize! (Also hope those 300+ folks who tossed their virtual names in the bag feel moved to go buy a copy)

My publisher actually put a lot of work into the production of the book, with careful and thorough copyedits that helped me catch some last-minute ripple-effect incongruities from an added chapter. Great folks to work with!
Posted by Anne Petty at 6:53 PM No comments:

That which is unnecessary shall be washed away...

Well, at least that's what it says on one of the cards that shows up the most in my tarot deck. But the saying fits with an ongoing conversation I've been having with authors and agents and a couple of small publishers on Twitter...mainly how the collapse of big-box booksellers may bring about the resurgence of the neighborhood indie bookstore. Would love for it to be true.
Posted by Anne Petty at 1:54 AM No comments:

Woohoo - the box of free author's copies for SHAMAN'S BLOOD came yesterday!  Wow, still loving that cover with the monster serpent on it.
Posted by Anne Petty at 1:23 PM No comments:

The mythic impulse – what drives our species to think in these terms and put these concepts into stories? A primary reason is to locate ourselves in the universe, to interpret space and the planet we inhabit. Refining that slightly and we have mystical reasons: religious, metaphysical, a sense of awe, a reverence for the mystery of life. On a social level, myths validate established moral orders, and establish codes of behavior. Psychologically, myths help explain how individuals relate to culture and society – they explore what it means to be human. It’s this last function that I think applies most to the artist (writer, sculptor, musician, etc.) as mythmaker.
How does this so-called “mythic impulse” translate into what we write? It’s in the recognition of mortality, confronting the inevitability of death.  It’s in expressing the social order you’re part of (or want to deny), in trying to see more deeply into the “spectacle” of the universe and our own existence within it.
Campbell wrote and lectured on the concept of humanity’s impulse to explain itself in mythic terms, and frequently suggested that in today’s cultures it’s more often the artist who articulates mythic structures and symbols in our lives, assuming a function once relegated mostly to the priestly class of past millennia. As artists, and particularly as writers, we siphon structure and content from the mythic imagination and make it uniquely ours. Is there a progression from the flawed gods of old to dark superheroes like Batman and Optimus Prime? Anyone who thinks myths aren’t relevant to our modern society hasn’t read any Neil Gaiman recently. And maybe that’s another topic all by itself!
Posted by Anne Petty at 10:51 PM No comments:

Nice advance reviews of Shaman's Blood showing up on Goodreads. Thanks to those who liked it and "got" the story!! http://www.goodreads.com/book/show/11875885-shaman-s-blood
Posted by Anne Petty at 12:03 PM No comments: