Yesterday was my birthday. In spite of all the dire prediction about how many months I had left, here I am, celebrating the release of LIMBUS,INC., and enjoying a week-long visit from my Seattle-based daughter. Life is good.

Cherish your health while you have it - don't take it for granted as I once did.
Posted by Anne Petty at 1:38 PM 2 comments:

Looks like I'll have another book out this year from JournalStone. This one - Limbus, Inc. -  has a lot of steam behind it, by that I mean a lot of really stellar authors in this little anthology which was my brainchild. I have a story in the anthology, but all 5 stories are as different as the styles of the writers. The standard edition should be out in May but there's also a special edition that has illustrations for each story and an exclusive Guide to Limbus, which won't be in the regular edition. 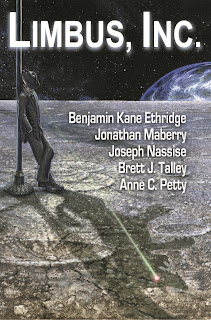 This past Friday my latest novel THE CORNERSTONE was officially published by Journalstone Publishing in San Francisco. So the next day I hosted a launch party at The Mockingbird Cafe, a local eatery frequented by writerly types around town.

Turnout was fabulous and books sales very rewarding. But best of all was just hanging out with so many friends that I haven't seen in ages. I guess this was my first official social event since I got sick way back in June of 2012. I've been sequestered for so long, simply because I just didn't have the energy to be social, I'd sort of forgotten how to behave in public. But Saturday's party was just what I needed! Here's to more good times throughout this new year. 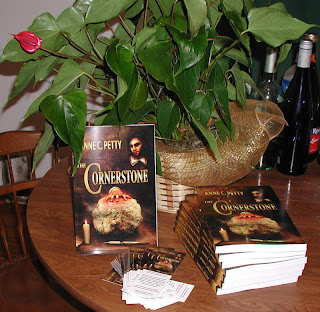 My thoughts on researching one's fiction:

http://journalstone.com/authors/authors-m-z/anne-petty/anne-c-petty-in-her-own-words/
Posted by Anne Petty at 3:40 PM No comments:

Off to a good start

My first publication of 2013! An essay on the Bridle Path Press site, for their "From the Masters" series.  Enjoy.
http://www.bridlepathpress.com/FromtheMastersJanuary2013/tabid/236/Default.aspx
Posted by Anne Petty at 3:15 PM No comments:

My husband and I decided not to give each other gifts this holiday season. We both agree that all we really want this time around is each other, alive and well.  I know how sappy that sounds, and there were years past when I might have sneered at someone writing such sentimental claptrap, but no more. As we say, my priorities have shifted.

No gifting doesn't mean we aren't celebrating the season, of course. I have a newfound interest in apple cider, eggnog (especially with a splash of Marsala), cranberry juice and a whole host of other drinkables. We have a pine wreath on the door and our pomelo tree out back is bursting with fruit. I plan to gather some up and put them in baskets to give to friends.

We're still coasting on the wonderful six days daughter April (check out her blog, Peace in the Body) spent with us. She's grown into such an amazing young woman - how did we do that?  I'm just glad she's willing to put up with the long trip from Seattle to Florida to visit us. So having her here was our early Winter Solstice celebration. Pigged out totally at Spring Creek Restaurant day before she left. It was the first time I'd been back there since I got sick in June. Making progress.

Hope everyone has a joyous and meaningful holiday season, however you celebrate it (or even if you don't). It definitely means more to me this year, since I was warned I might not even be around to enjoy it. But here I am, beating the odds. Happy Solstice!

On the bright side...

There is good news to report.

As difficult as chemo has been on my body, it seems to be doing its job. My survival prognosis has improved greatly and I do believe I have turned a corner, moving from perilous patient to long-term survivor. As my wise daughter reminded me, medical treatment is as much an art form as a logical follow-the-numbers set of procedures. It takes a physician who has impeccable instincts as well as formidable training and experience. I happened to luck out and find an oncologist, Dr. Marie Amanze, with all those attributes.

As I grow stronger and more mentally acute, I hope to start blogging more frequently.  I'm also putting the finishing touches on my next novel, The Cornerstone, due out from JournalStone Publishing in February 2013. I'm so excited about this book - it's been a long time in the making and I'm really pleased with the way it's turning out.  And another very cool project that I'm editing with JournalStone is the LIMBUS collection, which will also be available early next year. It's a fabulous grouping of 5 stories by accomplished writers in the horror/fantasy/sci-fi fields.

So much to look forward to.

Can this body be saved?

Some of my readers may know that since June of this year, I've been battling a fast-growing form of lung cancer...which has my doctors baffled because I am a nonsmoker. That's right, never smoked a day in my life, yet I have the classic smoker's lung cancer. No explanation for what triggered it. Maybe on a cosmic level I was bored, writing about life and death situations in my books and stories, but without much empathy for what life - and the loss of it - really means.

When I was admitted to the hospital it was an emergency life and death situation. Could barely breathe from the tumor in my left lung pressing against a bronchial tube. Since then, I've been in the OR twice, am halfway through a 6-cycle chemotherapy treatment with possible radiation at the end, and had two transfusions. It's a scary ride, and some nights my husband and I have held each other and cried.

Every day it's a constant fight to keep all my internal systems functioning. At any given time my white platelets may be too low, I might have scary-level anemia from not enough red blood cells, not enough potassium, not enough magnesium, not enough fluid intake, the list goes on...not to mention the ordinary daily process of kidney function and avoiding constipation. I've lost over 20 pounds because it's hard to keep food down on a regular basis, and many of my favorite foods have been ruined by the salty metallic taste the chemo drugs cause in my mouth.

All this is daunting to say the least, but there have been some positives as well, which is really the point of this post. The outpouring of support and encouragement from friends and the wonderful company I work for (I'm currently on leave of absence from them but hope to return before the end of the year), the selfless help of people who went out of their way to make things better for me, and so much more. I was also amazed at the number of writers I'm associated with who have their own cancer survival stories to share.  The biggest positive of all is the upgrade in my prognosis status for survival from "poor" to "good" with the goal now being long-term remission.

What has this done for me as a writer? I think it has made me less cerebral about the big issues of life and death. So easy to kill off characters on paper. But having stared my own possible quick demise in the face, my perspective is changed forever. I hope it will infuse my storytelling with a level of immediacy and empathy that was missing. We'll see....

Where do story ideas come from?

It seems to be a staple question on almost every interview I've done - where do you get your ideas?

I honestly cannot say specifically what fuels my imagination for stories and novels. Most often ideas come unbidden, when I'm not even looking for inspiration. I'll be thinking about something unrelated to writing and realize it could make a viable story, or I'll be tinkering with some story possibility that's not really working and a solution or better alternative just suddenly sticks its neck out.

I know that if I deliberately set out to come up with what to write about next, I'll get nowhere. This doesn't apply to assignment-driving writing, of course; I'm talking about my own creative endeavors where anything goes. I guess my muse is a like quantum particle. If I try to look at her directly, she disappears. If I ignore her and don't think about writing, she slips something into my brain pan, like she did last night when I wondered what my next novel would be about. I should learn to trust her more. ;D

Posted by Anne Petty at 6:16 PM No comments: